Fairfield, NJ – MG America, the U.S. subsidiary of MG2 of Bologna, Italy and a leading supplier of processing and packaging equipment, has become a distributor in the U.S., Canada and Puerto Rico for a line of tablet presses from Germany-based machinery manufacturer kg-pharma. The new relationship marks MG America’s first foray into the North American tablet press marketplace.

The three-machine series is suitable for both R&D and pilot scale production, with the most high-production press, the Futorque X-1, capable of producing up to 108,000 tablets per hour.  Each machine features automatic weight regulation by filling depth, and comes with a fully instrumented R&D package including specialized software.  Containment
also is available on each press.

The machines comprising kg-pharma’s line of tablet presses are: 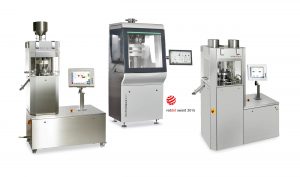 With the RoTab Bilayer, kg pharma’s “miniaturized production” design concept enables smooth, fully transparent scale up.  Various punch formats can be used, and a complete form part change can be conducted in under 45 minutes. The RoTab Bilayer is also designed for operation with only one occupied punch station. The sampling for the first layer is possible at the push of a button during production. Anti-cross-contamination minimizes a “mixing” of the layers thanks to two separated suction bars.  The mobile, compact unit weighs a mere 1,300 kg.

Among other technical innovations, the mono-layer Futorque X-1 tablet press features a high torque servo drive for maximum force at slow turret speed – a must-have for R&D.  kg-pharma’s signature FlexAdapt system offers compatibility with standard turrets (B-18 and D-14) and popular punch formats at a pitch circle of 240mm.  The company already is planning a next-generation, bilayer Futorque model for the near future.

Each of the three tablet presses from kg-pharma shows its benefits from pre-production phases and R&D stages through production itself.  They are ideally suited for scale-up purposes and production optimization, offering substantial potential savings through this versatility. Each also offers intuitive interaction via an 18½-inch HMI screen and smartphone-enabled remote operation.